THE 20TH ANNIVERSARY OF THE UN WORLD CONFERENCE AGAINST RACISM (WCAR)

CHALLENGES AND ADVANCES IN THE GLOBAL FIGHT AGAINST RACISM 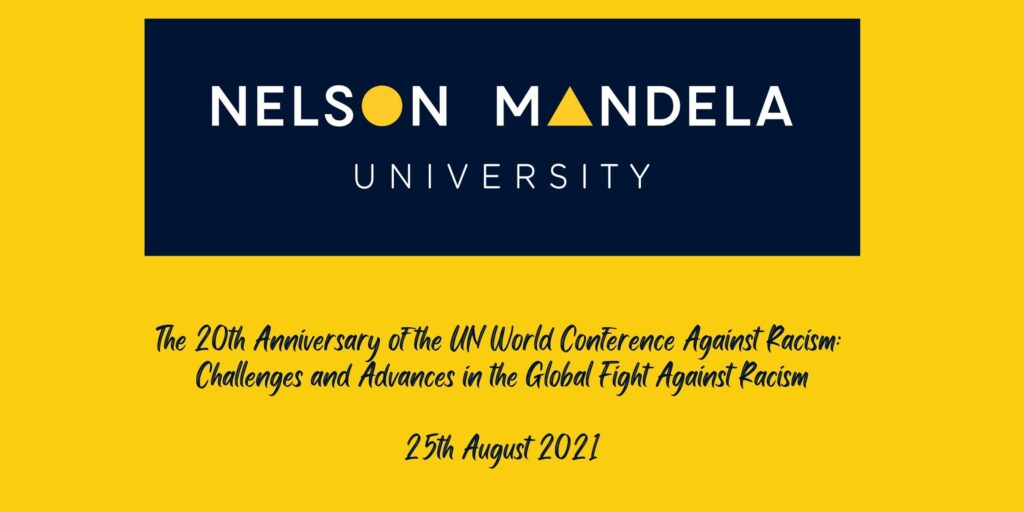 On August 25th, 2021, Nelson Mandela University presented a webinar commemorating the twentieth anniversary of the United Nations World Conference Against Racism which resonates The International Social Impact Institute and its collaborators are keenly interested in the matters addressed and share the webinar organizers’ vision of social justice and anti-racism, we are pleased to offer a synopsis of the remarks of the various presenters.

The panel consisted of moderator Prof. Christi van der Westhuizen (Critical Whiteness Scholar, Associate Professor in the University’s Centre for the Advancement of Non-Racialism and Democracy, and a former political correspondent who reported on the WCAR) and the following discussants:

Prof. Muthwa opened the conversation by highlighting its timeliness, given recent racially motivated killings in South Africa as well as the George Floyd killing in the United States and the increased prominence of the Black Lives Matter movement. She noted that the topic is also relevant to the University’s “Vision 2030” — a commitment to combating racism and other forms of prejudice and discrimination.

The panelists uniformly credited the WCAR with having given the world a new language, legislative framework and plan of action for acknowledging, and taking action in response to, racism, xenophobia, and other forms of discrimination. They also agreed that the Conference offered greater visibility for minority communities and victims of racism, including people of African descent, other indigenous peoples, and the Dalit community in India.

Ambassador January-Bardill noted that a legislative framework for addressing racist activities does not, of itself, produce social transformation. She therefore called on governments to invest resources into education on racism, both at the school/institutional level and the family/societal level, as an essential step toward fundamental change.

Echoing that theme, and further accentuating the relevance of the socio-economic dimension for the fight against racism, Chancellor Fraser-Molaketi quoted a statement made at the Conference by Thabo Mbeki: “Global experience stretching over a long period of time demonstrates that the creation of a constitutional and legal framework for suppression of racism is a necessary but insufficient condition to end the violation of human rights…. The creation of socioeconomic conditions enabling such equalities to be achieved is fundamental to the realization of the constitutional and legally guaranteed rights to equality.” She also commended the South African government for developing a National Plan of Action (2019) to combat racism, racial discrimination, xenophobia, and related intolerance. She characterized this as a comprehensive plan founded on principles of universality, interdependence, human rights, participation and inclusion, progressive realization, and accountability.

Dr. Pityana observed that racist attitudes and beliefs remain well entrenched in today’s society, even as some of their cruder expressions have come to be regarded as unacceptable. “Internalized racial subjectivity” remains common among persons of all communities. Like Ambassador January-Bardill and Chancellor Fraser-Molaketi, Dr. Pityana opined that dealing with the systemic persistence of racism fundamentally requires something akin to the dismantling and restructuring of the socio-economic fabric of society.

Prof. Tate tackled the controversial topic of reparative justice, pointing out how the payment of reparations by former colonizers involves assigning a monetary value to the lives of their victims. Highlighting the work of the Caribbean Reparative Committee, she asserted that reparation should be viewed as a process, including an apology, an admission regarding the legacy of the crimes, and an expression of willingness to work in partnership with the victims for the development of their societies.

Prof. Keet concluded the conversation by pointing out that a post-WCAR inertia seems to have replaced the commitments to action expressed at the Conference. He observed that with South Africa’s hosting of the Conference its recent emergence from the apartheid system, the nation could well have served as an experimental space for tackling racism – yet it has yet to establish a world-recognized center for the study of racism in the 20 years since the Durban Conference. He also challenged his colleagues, the university, South Africa, and the world to channel our energies into strengthening communities and developing both a language and a practice for dealing with racism.

Visit the following links to: